November 27, 2013 / Comments Off on The President’s Message / Posted in: December Newsletter 2013, The President's Message

As I write this message it is the day after the severe storm in Tazewell and Woodford counties. I am thankful our neighborhood was safe. I cannot begin to imagine what it would be like to sustain damage like that and especially at this time of the year when everyone else is celebrating the holidays safe in their homes. I have asked our board of directors to consider making a donation on behalf of the Moss Bradley Residential Association to one of the relief organizations.

Considering all we have to be thankful for, I wish all of you and your families a very Merry Christmas and a safe and Happy New Year.

The Splendor of Christmas Past

November 27, 2013 / Comments Off on The Splendor of Christmas Past / Posted in: December Newsletter 2013, Peoria Historical Society 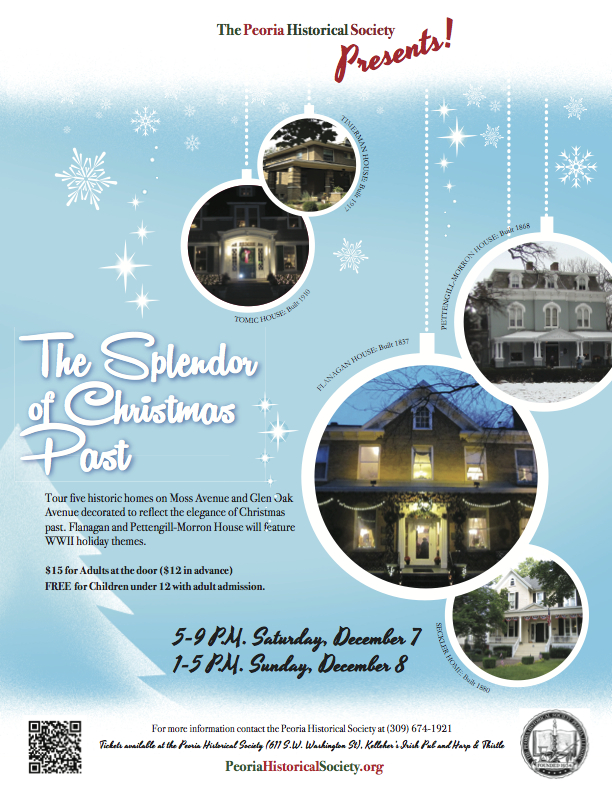 Celebrate the wonder and magic of the holiday season with the Peoria Historical Society’s annual historic home tour.

Revel in the warmth, beauty, and craftsmanship of five magnificent historic homes, each representing a unique architectural style: 1837 American Federalist which is the oldest single family dwelling in Peoria; 1917 Arts and Crafts which was once owned by famous The Faust Club proprietors; a 1910 Cape Cod built by the Lovelace Corning family and for which Lovelace Hall at Bradley University is named; a 1868 Second Empire/Victorian which contains a unique collection of furnishings from several Peoria families; and an 1880 Stick- Eastlake gem with restored Arts and Craft interior, whose exterior and upstairs is currently under renovation.

This year, both the John C. Flanagan and Pettengill-Morron House will hearken back to the Fabulous Forties and feature exhibits honoring the men and women who served our country during World War II. See how Christmas was celebrated in the past and how current residents are restoring and decorating these extraordinary gems today. There might even be an appearance by Old St. Nick!

A hundred percent of the funds raised from ticket sales will support the Society’s efforts to preserve, share and celebrate the history of the Peoria area, by facilitating the purchase of faster digitization equipment, preservation of the Society’s museum homes, and fund enhanced exhibits and website for the enjoyment and education.

The John C. Flanagan House was built in 1837 and is the oldest standing house in Peoria. This American
Federalist style house offers a spectacular view of the Illinois River Valley. John, a Philadelphia lawyer, came to settle his father’s estate of 600 acres, acquired in 1824. He decided to build and become a land developer. Native Americans assisted in the construction of the home. A sawmill and brick kiln were also built on the property. The Society acquired the house in 1962 and it was placed on the National Register of Historic Places in 1975. Displays include: Empire furnishings and period artifacts, 18th and 19th century area history, Peoria’s distillery industry, collections of antique glass, china, furniture, toys, quilts, and vintage clothing. House decor and costumed interpreters will portray a WWII era Christmas theme dedicated to our service women and men – “If Only in your Dreams.”

Built in 1880 by a Congregational pastor, the home was later enlarged by N.C. Dougherty (Peoria superintendent of schools later jailed for embezzlement) into the current larger configuration. The Today relatively few surviving examples of the style exist compared to other more popular styles of Victorian architecture.

Stick-Eastlake is a style named for Charles Eastlake often referred to as Victorian Stick. The Stick-Eastlake style enjoyed popularity in the late 19th century. Over the years most of the exterior Stick-Eastlake features were removed. The main floor architecture is the Arts and Crafts Style popular when Doughtery remodeled. Behind the home and inaccessible to the public is the original carriage house.

With a spectacular Illinois River view, Sherry Seckler has owned the home for 8 years and is currently restoring the home to its former grandeur. The exterior is currently being repainted to accentuate the architecture with plans to replace and enlarge the front porch in the future. Several bedrooms have recently been refurbished with plans to stabilize the upper porch and restore the sitting room that it adjoins. Enjoy a work in progress during the multi-year transformation.

Celebrate a post-WWII Christmas holiday with Miss Jean Morron at The Pettengill-Morron House. Built by Moses Pettengill in 1868 in the Second Empire architectural style with 11 rooms, the museum contains a unique collection of possessions from several generations of a Peoria family. In 1900 a colonial revival porch and porte-cochere were added, giving the home a grand Victorian appearance. Miss Morron acquired the property from the John Boyd Stone family in 1953 and owned the house until her death in 1966. After her death the house and its contents were given to the Peoria
Historical Society.

The Timerman home was originally built between 1883 and 1887 as a single story, white clapboard Victorian (see black and white picture below) similar to the current home at 1539. In 1916 or 1917, the owners, Dr. Adolph and Johanna Foertner remodeled it into the current brick, two-story home on the tour today. It features a beautifully maintained Arts and Crafts interior with most of the original woodwork and floors, all in superb condition.

In 1950 William and Beverly Chapman, owners of The Faust Club (Peoria nightclub) added the swimming pool in order to relax after their 4:00 A.M. closing time. They also removed the original radiators and installed the present heating system. The home was sold in 1962 to the Frasco family and again sold in 1966 to Robert and Marie Calvetti. After the Calvetti lives were threatened, the first alarm system was installed. Sometime after that, they moved and left the home vacant.

Hugo and Doris Hoerdeman purchased the home in 1969 and moved in with their four children. Their care and attention for 32 years has left the home in excellent condition. John and Barb Timerman purchased the home in 2001 and had little remodeling left to do. The TV room floor was replaced in 2002 and the downstairs bathroom was remodeled in 2003. The kitchen was updated recently. John and Barb welcome you to their beautiful Arts and Crafts style home and hope you enjoy your tour.

Built in 1910 by architects Reeves and Ballie for Thomas and Gladys Corning Lovelace, the Cape Cod style home has fabulous birch floors instead of the traditional oak floors used at the time, the original stained glass windows with the decorative “L” for Lovelace on the landing, beautiful leaded glass doors and restored woodwork throughout the home.

The Corning and Lovelace families were prominent Peorians affiliated with Corning Distilling Company, Commercial National Bank, Bradley University, and Allied Mills. Lovelace Hall at Bradley University was name after the family. Restoration of the home began in 2003 and continues today.

For more information, group tours or to purchase tickets, please contact the Peoria Historical Society at 309.674-.921 or visit peoriahistoricalsociety.org. Tickets may be purchased at Kelleher’s Irish Pub & Eatery on Water Street downtown, Harp & Thistle in Peoria Heights, at the Society’s Washington Street office, or from a board member.

How do we look to those passing by? Observations…questions…hopes…concerns
by Marjorie Klise

I was in San Francisco last week, and as usual when I am there, I attended a particular church service. It is one of those situations that reassure me of the amazing breadth of humanity.

The first clue that this is not your usual congregation is the fact that if you drive to church you just double park along a very busy street and give your keys to a total stranger! Some of these people are church staff and some are members of the local homeless community. They are able to move cars to let those who have parked on the inside depart if necessary. There is no tip or payment required when you retrieve your keys and drive away….just a smile and a thank you.

Upon entering the church it doesn’t take long for someone to recognize you as a newcomer, so you get a hug and a hearty welcome…and someone motions you to join them in a pew. I sat with a gentleman who is HIV positive, a public defender with the SF courts, an accountant and a homeless woman who is wheelchair bound and sight impaired. (Robin Williams was a congregant when I was there last time.) We found many ideas and thoughts to share and when the loud, brash and totally professional choir began to sing with the aid of a great band, we stood and clapped and swayed and finger-clicked and hugged some more. I am not normally a big hugger but there is no stopping these folks.

When the homily began with the statement that “we are all part of a radical inclusive community” it occurred to me that the Moss-Bradley area also is a radical inclusive community. Here on the west bluff we step up to offer our services to each other and don’t expect anything in return. We welcome the newcomers with coffee and hugs. We are a mix of color, politics, race and profession. And we take a risk. We attempt to include, not exclude.

So if you see a bit of a swagger in our step it is just because we know this inclusive life can not only work but that it is the only way to make this world a better place…and to pass on our rich radical heritage to those who come after.

(And if you go to San Francisco head for the Tenderloin and see what radical inclusiveness can look like on Sunday AM.)

Events at the Franciscan Recreation Complex

Christmas is a joyous time at Westminster Presbyterian Church. All are invited to worship with us at the following services through this holiday season:

Presented by St. Mark’s Boy Scout Troop and our Parish and School Association

Please join us for a breakfast buffet, cookie walk and have your picture taken with a very special guest, Santa.

We look forward to meeting you!