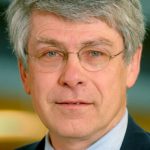 PEORIA — It will be a hilltop homecoming for Bradley University’s next president.

Gary R. Roberts, announced as the school’s 11th leader on Friday in a ceremony at Dingeldine Music Center, is the first alumnus to hold the position since Martin “Jerry” Abegg retired in 1992.