All posts in Converse Manor 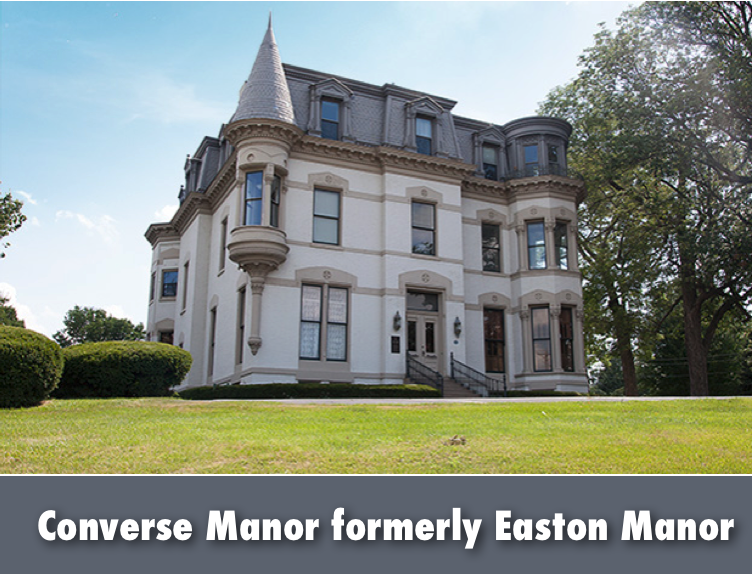 Originally called Hillcrest Manor and Easton Manor, the home was built in 1881 by Edward S. Easton and his wife Sarah, two of Peoria’s most prominent citizens, as their primary residence. Edward, like his father and grandfather before him, made his fortune in the grain business.

The home was designed by a Swedish architect, and built in the Victorian style with Second Empire elements, most notably the mansard roofline, which extends from the top level of the house to down around the upper-story windows. The home incorporates European architectural elements the Eastons admired during their extensive travels abroad, including floor tiles from England, ceiling fresco paintings (which were unfortunately painted over long ago), and delicate adornments using ebony, marble and etched glass. The original ballroom chandelier now hangs in the Metropolitan Museum of Art in New York.

The home was owned by many individuals including Col. John Comstock, a prominent Peoria Realtor, who purchased the mansion after Edward Easton’s death around 1901. After the Comstocks left in the 1960s, the home was abandoned for years and ultimately slated for demolition. Three times the Peoria City Council gave the owner’s permission to tear it down and construct a high-rise apartment building in its place. Three times the project fell through due to protests by preservationists who ultimately had it placed on the National Registry of Historic Places.

The building was then abandoned and fell into a state of disrepair. It was briefly owned by Dan and Vivian Capps, historic preservationists who began the restoration process. They searched local antique shops, finding some of the original brass work and door hinges in antique shops and returning those to the home.

In 1997, Jane Converse purchased the home for her growing business — preferring to save a beautiful historic landmark rather than build something new. It was a labor of love. Continuing the work started by the Capps, she embarked on a major renovation project and hired Les Kenyon to be the restoration architect, Cullinan Properties to provide construction management services, and Kevin Schoemaker of Hine Construction to be the master carpenter.