All posts in January Newsletter 2017

January 4, 2017 / Comments Off on President’s Message / Posted in: January Newsletter 2017, The President's Message

It takes a village…or a neighborhood.

Recently, a neighbor in the Cottage District passed away.  He was found dead outside laying on the ground on Sunday, December 18th in sub zero temperatures.  The cause of death was exposure.  He was a friendly gentleman always saying Hello and engaging in conversation.  He was quirky.  Our neighbors on St. James liked him.  He was part of our neighborhood.  We looked out for him and always helped him with little things that made a difference in his life. He had his “demons” that sometimes affected his life .  Unfortunately, he never asked for help when those “demons” came calling.

I share this story because so many people are silent about asking for help.  Fear is what gets in the way.  Fear of over-stepping a friendship or of appearing too needy.  Or simply, a fear of revealing our struggle.  But when you don’t ask for help when you need it, you assume all of a burden.

Neighborhoods are social communities with considerable face-to-face interaction among its members.  We all share a common bond and are unified in our belief of creating  a better place in this world.  Most, if not all of us, care enough about our neighbors that we’d at least listen to someone who needs our help.

We can all do so much more together than we ever can alone.
As the New Year sets upon us, think of all the resolutions you’ve made or are going to make and add a resolution to be a good neighbor.  Ask for help when you need to.  Just as importantly, offer to help when you believe someone needs it.

I would like to address all of you about some great economic opportunities which lie ahead. Jobs are so important for the health and vitality of our community. Our city infrastructure rebuild will be vital, not to mention 10 years of work for local workers, pursuant to a green resolution of the EPA lawsuit. Stay tuned!

While there is uncertainty in the land during the Presidential Transition, I am hopeful that a much needed national infrastructure rebuild for our country will yield great dividends for a key employer, Caterpillar Tractor.

In District 2, a 15 million dollar project looms in the rebuilding of Pierson Hills, soon to be renamed Parkwood Commons.

Also, hundreds of jobs are looming for Bradley’s impending 90 million dollar Convergence Center to be built on the West Main Hilltop.

A potential moonshot effort to make the USA the global colossus in sustainable and renewable fuels –wind and solar– should contribute to a return to great prosperity and a revival of our middle class. This all has a direct impact on us in District Two.

I believe there is every reason to look with confidence to our future economically. It is my deepest hope that all of you find joy, health, and love in the New Year. Let us look back on 2016 as a year of great challenge, with great opportunity ahead. From my loved ones to you, I wish all of you the best for 2017!

Paul Masick: Down in the Trenches

January 4, 2017 / Comments Off on Paul Masick: Down in the Trenches / Posted in: January Newsletter 2017, Meet Our Neighbors 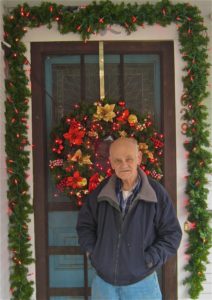 In the early spring of 2016 when Paul Masick’s friend and Moss-Bradley neighbor, Marjorie Klise, nominated him for MRBA Volunteer of the Year, she submitted a brief list of how he serves the neighborhood: “replaces the tattered flag, fabricates the neighborhood signs, attends endless meetings, paints the gazebo, has served on every board and committee.” She was only skimming the surface.

Paul’s service to the neighborhood is long and deep. And in addition to his community contributions, he pursues many other interests quietly but intensely.

Paul grew up in Jacksonville, Illinois, raised by his grandmother. He credits scouting with being crucial to his development. Early on he earned a scouting Silver Arrow and was given the Indian nickname, “Dark Star”, perhaps foreseeing a future for him as a bright star in his firmament. He later became an Eagle Scout, earning two Silver Palms. He has fond memories of trips to Philmont Ranch, the Boy Scout center in New Mexico, where he once met up with the oil baron, Waite Phillips, who gave the land to the Boy Scouts of America.

At Fort Leonard Wood , Missouri, while serving in US Army, Paul continued his interest in scouting , acting as Scout Master and establishing a Cub Scout Pack for boys living on the post with their military families.

After discharge from the Army, Paul came to Peoria and went to work for Cilco, the Central Illinois utility company, in the Credit Department. While employed with Cilco he earned a Bachelor of Law degree in l97l from the LaSalle Extension University. He slyly says he was inspired to learn about legal matters when he had to hire an attorney and was impressed by how money the attorney charged for doing a relatively small amount of work. His legal degree served him well in his Cilco position and he was to spend 33 years with the company before retiring in 1996.

But, apparently never ever contemplating a life of leisure, in 1976, Paul bought a dilapidated and in danger of being torn down house at the corner of Cooper and Ayres in the virtual center of the Moss-Bradley area and thus began his forty years of home ownership, neighborhood involvement and community service.

Looking at photos of the house in 1976 and seeing it today, one would hardly recognize it as the same place. Siding, windows and roofing outside; woodwork, walls, plumbing and painting inside – all testament to hours of planning and backbreaking labor, all done by Paul. The yard was transformed from a literal junkyard to a landscaped space with brick patio, fountain, a profusion of plants and trees and grass, all expertly tended and surrounded by a pristine picket fence. Paul has won the Keep Peoria Beautiful Iris Award given for outstanding landscaping and beautification of home and garden, twice – first in 2006 and again in 2016.
In the mid seventies Paul had been active in Peoria Players, serving as production manager for six years and president from 1975 to 1977. Taking on homeownership in 1976 kept him busy with renovation and maintenance. But after retirement from Cilco, he turned his sights on his neighborhood and community.

Paul served on the City of Peoria Historic Preservation Commission for over 10 years, including Chairman for three years from 2005 to 2008. He has been President of Moss Bradley Residential Association twice, first for two years from 2001 to 2003, and again in 2006. As the MBRA representative to the West Bluff Council, he has been Vice President twice and President three times in the last 10 years. He also received the West Bluff Council Pillar Award in 2004.

Paul has represented Moss Bradley in the Neighborhood Alliance, a consortium of 29 neighborhood associations in Peoria, for over five years, serving as both Vice President and President during those years. The Western Avenue Greenway project enlisted him for their board in 2014 and this year elected him Vice President.

Never missing a beat in keeping his garden blooming, getting his garbage out in time, turning out fine pieces in his home woodworking shop, and doing a little landscape painting in his spare time, in 2016, Paul received the first Moss-Bradley Volunteer of the year award, and as his friend Marjorie, pointed out, “no one has been in the trenches for the ‘dirty work’ more than Paul Masick.”

Attached to Paul’s house, near the front door, is a bronze plaque, awarded by one of his friends when he became a member of the Peoria Historic Preservation Commission. It says, “On this site in 1897 nothing happened.” That was before Paul Masick moved in one hundred years later and made big things happen.